The OPCW-UN Joint Mission on the elimination of Syrian chemical weapons has completed its mandate and its operations drew to a close on 30 September 2014. From there on, the OPCW mission in Syria will continue to deal with the destruction of chemical weapon production facilities and clarification of certain aspects of the Syrian initial declaration. 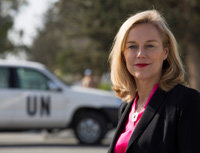 United Nations Secretary-General Ban Ki-moon announced the appointment of Sigrid Kaag of the Netherlands as Special Coordinator of the Organisation for the Prohibition of Chemical Weapons (OPCW)-United Nations Joint Mission to eliminate the chemical weapons programme of the Syrian Arab Republic on 16 October 2013. The position is at the rank of Under-Secretary-General.

Ms. Kaag brings a wealth of experience in international organizations and the diplomatic service, combined with country experience, notably in the Middle East. Prior, Ms. Kaag was Assistant Secretary-General of the Bureau of External Relations and Advocacy of the United Nations Development Programme (UNDP). She was Regional Director for the Middle East and North Africa of the United Nations Children’s Fund (UNICEF) in Amman, Jordan (2007-2010), and earlier as Chief of Staff to the Executive Director and Deputy Director of Programmes in New York. Prior to becoming a Senior Adviser in the Office of the Deputy Special Representative of the Secretary-General in Sudan, Ms Kaag served for four years as the Chief of Donor Relations with the International Organization for Migration (IOM) and Senior Programme Manager with the External Relations Office of the United Nations Relief and Works Agency for Palestine Refugees in the Near East (UNRWA).

Ms. Kaag also served in her country’s Ministry of Foreign Affairs as Deputy Head of Sector in the United Nations Political Affairs Department at The Hague. Early in her career, she worked for Shell International Petroleum Company in London.

Ms. Kaag holds a Masters in Philosophy in International Relations from St. Antony’s College, Oxford University. She received a second Masters degree in Politics and Economics of the Middle East from University of Exeter where she also recently received an honorary doctorate degree. Besides Dutch, she is fluent in English, French and German, and proficient in Arabic.